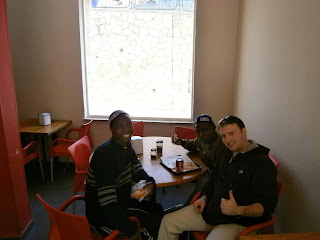 Moshe–Madoi (right) and Tarphon (left) came to Yeshivat Ha’mivtar where I studied for half a year a few months ago. They were raised Jewish and are now trying to get an Orthodox conversion. I’m pasting a story describing their personal/tribal history that was featured on the JPost website but first, a brief introduction of my own:

Moshe, Tarphon and I became fast friends after they arrived at the yeshiva in Efrat. The yeshiva is nothing like the pastural Ugandan town they have grown used to. It’s surrounded by barbed wire at the perimeter and an armed guard consisting of 2 male/female soldiers (usually from the modi’in unit) is present at a watch tower 24/7. Students have access to nearby Efrat, a Judean hilltop “settlement” with a picturesque view of the surrounding hills.

One can visit Efrat to have pizza at the local family-owned (and what a family!) pizzeria, have a saltry burger at the burger bar next door, buy just about anything they fancy at one of two local grocery stores, sign up for a tour anywhere in the world at a tour agency at the same mall, and so much more! But this isn’t about Efrat now, is it!?

Moshe and Tarphon are two guys who’ve inspired me to be the best I can be. Best person. Best Israeli. Best Jew. And to be sure, they espouse all these in who they are. Over a period of about 3-4 months, Moshe and Tarphon won me over with their polite, honest demeanor, their compassion, and their willingness to study Torah and the Jewish way of life which, as a matter of fact, they’re more familiar than me.

I’m going to cut this short and give you the JPost article on my two friends:

Participants at the ROI Summit, the gathering of young Jewish leaders that kicked off in Jerusalem on Sunday, are a case study in diversity. They come from dozens of countries and belong to many different streams of Judaism, or are entirely secular.

Still, Moshe Madoi of Uganda sticks out even in this colorful crowd. The 24-year-old yeshiva student, who is the only black participant in the conference this year, said he has been warmly welcomed by organizers at the conference and in Israel in general.

“In Efrat, where I am living, there has not been any kind of racism of segregation,” he said.

Madoi is a member of the Abaduya, a religious minority in eastern Uganda that professes Judaism as its faith. The community members, which Madoi said number around 1,100 people, are followers and descendants of Tsemei Kakungulu, a 20th-century official who was fascinated by the Mosaic faith.

“He was given a bible with the New and Old Testament,” said Madoi, “but only followed the ones in the old one so a British officer told him, that’s what Jews do, so he said ‘OK, then I’m Jewish.’”

Madoi is in Israel to learn more about Orthodox Judaism and bring back that knowledge to the 100 people back home who adhere to that stream of Judaism (the other 1,000, he said, are Conservative Jews.) “Relations between the two groups used to be bad but now they are fine,” he said. “Now we go to each other’s synagogues and pray.”

He said he would like to make aliya with the rest of his community, but that depends on the government’s immigration policy. So far, the gates are closed to them especially since they have not converted to Judaism, as recognized by the Orthodox establishment in Israel.

“I would like to convert officially and so would the rest of the Orthodox community back home,” said Modai.

Meanwhile, he is busy expanding his Jewish horizons at the ROI Summit, which is happy to have him.

“We need the resolve to create a fully inclusive Jewish community that embraces every Jew seeking to lead a personally meaningful and active Jewish life,” said billionaire philanthropist Lynn Schusterman, chairwoman of the Charles and Lynn Schusterman Philanthropic Network and funder of the ROI Community.

“We need the courage to focus not on the question of who is a Jew, but on what we can do as Jews to strengthen our community and the world around us. In many ways, the ROI Community is an embodiment of this vision.”

How to Make Money on CFDs

I'm Eitan, a prolific blogger with interests ranging from US pop culture and sports to Israeli politics. An engaging writer who channels his creative genius to cook up a colorful stew of some rather interesting, always-provocative posts.
View all posts by Eitan Divinsky →
« For You (Whoever You Are)
It’s the Elites, Stupid! »