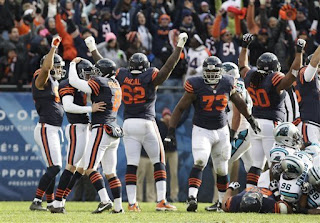 As I walked down the picturesque Ben Yehuda, surrounded on all sides by cute, little cafes and an a variety of shops aimed at attracting American tourists, I couldn’t help missing my hometown of Chicago, especially my beloved sports teams: the Bulls, White Sox, and Bears (I’m not a Cubs fan and Da ‘Hawks might not even have a season to speak of…).

Da Bears are coming off a less-than-stellar offensive performance. Star quarterback, Jay Cutler, hasn’t looked like he did last year and certainly hasn’t met the expectations that were set when he came over in a blockbuster trade from Denver. He has been good enough to hold his own against some less-than-average defenses such as yesterday’s Carolina Panthers, Dallas Cowboys, and Indiana Colts to name three out of the Bears’ first seven opponents this season.

Our defense has been pretty incredible, however. We’re currently ranked 7th overall, but I have a feeling this will improve as the season goes on. How about Tim Jennings and “Peanut” Tillman leading our secondary to a ridiculous amount of interceptions?!

Jennings had two more yesterday vs. Carolina. Tillman had one against Dallas and another the following week against Detroit as did Lance Briggs. The latter has had an outstanding career with the Bears. Brian Urlacher is also improving with every game. In short, the Bears’ “D” leaves little to ask for other than perhaps, just perhaps, a trip to the Superbowl. Is that too much to ask for for a life-long Bears’ (sufferer) who just happened to be a 4-year old baby last time they took home the NFL marbles?

As far as other sports news these days, there’s the Giants winning the World Series, Peyton Manning and his return to the NFL, my favorite female tennis player, Serena Williams winning an insane number of majors in ’12, Da Bulls revamping what seems to be their entire bench and starting the ’12 campaign without former MVP Derrick Rose, and oh, did I forget to mention, a whole new Israel Football League season about to get under way (or has it started already?).

How to Make Money on CFDs

I'm Eitan, a prolific blogger with interests ranging from US pop culture and sports to Israeli politics. An engaging writer who channels his creative genius to cook up a colorful stew of some rather interesting, always-provocative posts.
View all posts by Eitan Divinsky →
« Efrat: A Town that Represents All That’s Israel
Chess and Judaism (Based on the Learning at Aliyos Yerushalayim) »