Tel-Aviv and Jerusalem: A Tale of Two Cities

Tel-Aviv and Jerusalem: A Tale of Two Cities 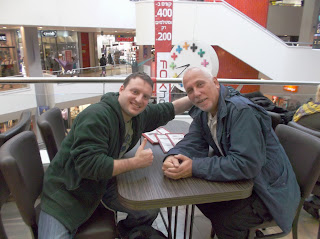 I got up early Friday morning, attended the local Chabad morning prayers, and took bus 75 to the central bus station in Jerusalem.

I hurried to find my way. I’d been here many times before, and the Friday morning hustle was nothing new to me. I encountered a few beggars on the way. Jerusalem is host to an array of both needy people and those pretending to be poor and spending their time benefiting from the locals’ generosity.

There’s a wide range of stores, pharmacies, cafes, restaurants, and even a place to donate blood at the central bus station. At this particular time of the year, it’s teaming with tourists from all over the world. Many are Christian pilgrims who’ve come to Israel for Christmas. Some continue on a tour of the Middle East, while others prefer to stay in Israel and remain shielded from the perils of our neighbors to the East.

Just before I entered the big, grey building a bit reminiscent of a cardboard box with holes, an Arab cab driver beckoned to me, yelling “Tel-Aviv, Tel-Aviv!” in all directions. His cries were so loud that I heard him as soon as I got off the bus. I wanted to thank him politely and continue on my way, but realized that this would be a faster way of reaching my destination.

I paid him and proceeded to sit in his mini-van for the next ten minutes before realizing there would be no takers besides me. While seated in the mini-van I listened to the all-Arabic radio station and figured it was probably the local P.A. station because screams of “Alla El-Akhbar,” the deadly reminder of Arab terror, protruded from the radio display ever so often. I decided to take the safe route, bus 480, to the railway station in Tel-Aviv.

Having arrived in “Sin City,” as religious Jews often refer to Tel-Aviv, I took a bus to the center. I had scheduled a meeting with an old buddy of mine, a German  Jew who’d been the guard (those were the days of the Intifada, but I believe there are still guards stationed there), at one of the dorm buildings in Tel-Aviv University, where I’d studied for my B.A. I’d taken a particular liking to Max despite his hard-core leftist leanings. We spent entire days chit-chatting about topics ranging from animal rights and preserving the environment to the rights of Palestinian refugees.

Max and I embraced when we met. It had been a long and difficult six years for me. It seemed he hadn’t had the easiest go of it either. We exchanged some greetings, and grabbed some seats at a kosher café (kosher restaurants are somewhat difficult to find in Sin City) in Dizzengoff Center, named for Tel-Aviv’s first mayor, and far-left activist Meir Yankelevich Dizzengoff.

We discussed the upcoming elections (Max is voting for one of the far-right parties in the hopes it will gain some seats and expose Israel as the “apartheid” state he believes it to be. I’m voting for this party as well, but for different reasons altogether. Ironically, we’ve been placed in the same camp party-wise, while being on opposite ends of Israel’s political spectrum). We also touched on Max’s plans of reducing pollution, and global warming, and his newly-found passion for clay sculpting. Towards the end of our get-together, we asked the waitress to take some pictures of the two of us.

From Dizzengoff Center, I travelled to Ramat Hasharon, an upper-class, northern suburb of Tel-Aviv, and a place I used to live in. I took bus 24, the bus I’d always taken on my way from either the center or Tel-Aviv University. I reminisced about days gone by as the bus violently swerved from one narrow street to the next leaving smaller vehicles wondering if Obama’s motorcade had finally made it to Israel and was now speeding along the not-so-docile streets of what America considers Israel’s capital.

We finally made it to Morasha, a religious enclave of Ramat Hasharon, where my Rabbi lives with his wife and five small children. They welcomed me warmly and I reached for the presents I’d brought them for Shabbat. The kids swarmed around me, insisting that they’d be the one to sit next to me at the dinner table. It was a relief to be in the company of people who cared about me as deeply as the Ariel’s.

The Ariel’s had come to Ramat Hasharon from Beit-El, a “settlement” deep inside the Green Line in 2006 following the expulsion of Jews from Gush Katif. They had actually moved to Gush Katif in 2005 right before the Disengagement from Gaza in order to protest the government’s actions. They’d been forcefully kicked out of their home. Their oldest son, Yonatan (literally “Given by G-d”) was born in Gush Katif.

I met Amitzur, the man of the family, when he was rolling the second-born, Yochai, up the building stairs in a stroller. I’d approached him and inquired where he was from and if I could study Torah with him. As he told me years later, he felt this was a “sign” he was making the right decision by moving to an unknown place with his young family.

When Shabbat had drawn to a close, I packed my things and set out on a long trek back to the eternal capital of the State of Israel and the Jewish people. I was glad to be heading home; sad that it would be some time before I saw the Ariel’s again. I was headed towards a city we, as a people, have dreamed of returning and rebuilding for two millennia; leaving the sprawling high-tech capital of the Middle East.

On my way back, I saw a lot of things that made me realize just how much of a difference there was between Jerusalem and Tel-Aviv. While Jerusalem symbolizes our People’s connection to their past, Tel-Aviv represents the desire of a large segment of Israel’s population to leave this past in the rear view mirror, and move forward to a better future empty of any reminders of years past. It symbolizes a departure from accepted mores and values; a separation from what we, as a people, have considered “sacred” for as long as we’ve been around.

And yet, Tel-Aviv is holy in its own way. Not only is it an integral part of Israel, but the great Rabbi, author, and scholar, Avraham Tzvi Ha’Kohen Kook,founder of the religious-Zionist movement that has captured the hearts and souls of so many Israelis today, made Tel-Aviv his home. Countless other religious authorities have spent their lives in Tel-Aviv. And Tel-Aviv is home to some of the world’s most renowned yeshivas and seminaries.

Thoughts about the future of my country and People occupied my mind as I closed my eyes and fell asleep on the bus heading along the hilly ascent to Jerusalem. I was making the coveted pilgrimage Jews had dreamed of making for the duration of our difficult, often tragic exile. What was better: Jerusalem or Tel-Aviv? Where would I settle next: the internationally-accepted capital of Israel or the one we, Jews, consider our nation’s center? And just before dozing off, and finding myself in dreamland, one last thought: Just how many people was the 70-year old bus driver going cut off before he was pulled over for breaking the speeding limit?

On Yogurt and Life (or should it be “On Life and Yogurt?”)

I'm Eitan, a prolific blogger with interests ranging from US pop culture and sports to Israeli politics. An engaging writer who channels his creative genius to cook up a colorful stew of some rather interesting, always-provocative posts.
View all posts by Eitan Divinsky →
« End of Days
Interview with Shlomo Epshteyn »