A Day in the Muslim Quarter

A Day in the Muslim Quarter 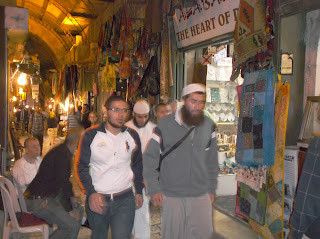 I recently had an opportunity to take a walk in the Muslim Quarter of the Old City of Jerusalem. Before going there, I’d always been a little apprehensive about showing up—especially with my kippa and tzitzit (the traditional Jewish garb). It took some courage and the friendly smile of a close friend who made Aliya about a year ago to persuade me to venture out of my familiar comfort zone into a hereto unknown reality.
We entered the Old City, a place holy to the world’s three great faiths, perhaps the most hotly contested area in the world through the Yaffo Gate. I asked my friend if she was up for some coffee (the cold weather was beginning to be felt in Jerusalem). She gladly accepted my offer.
As we sat there watching passerby’s, we noticed people of a variety of backgrounds that’s difficult to spot just about anywhere else. Both of us are Russian-speakers, so I pointed out a group of Russian tourists taking in the beauty of the Old City. They spoke in the traditional jargon that I simply couldn’t resist ignoring them. It was like being back in Moscow again. Some kind of dejavu…
We finished our coffee, and departed for the kotel (the Western Wall) the only remaining part of the Second Temple, and the holiest place for Jews. It was constructed by Herod in the 1st century BCE to add splendor to Jerusalem and fend off conquering armies.
I prayed the evening prayer, while my friend took pictures from the women’s section. The kotel vestibule is divided into two parts: one for men and the other for women. This is done for religious reasons. Judaism holds women to a higher standard than men. The sexes have their own unique qualities that need to be recognized.
I had mixed feelings as the final leg of our trip got under way. On one hand, having spent half a year living in Judea, I was familiar with the Arab mentality and their way of life, so I wasn’t too worried about showing my fear and falling prey to another terrorist attacks (stabbings became a daily occurrence in this area during the 2nd Intifada). On the other, I was a little apprehensive about being in a place I wasn’t welcomed in. This was Israel: it defined your general understanding of nature and history. You could be in a safe haven for all colors and creeds one second and in a literal war zone the very next.
My friend seemed less anxious than me. She’d been here before. I don’t know whether she’d been accompanied by someone or not, but she had an aura of invisibility that extended to me as well. I was glad to have her with me. I wondered if she was really as brave as she seemed, but I wasn’t about to ask any silly questions.
We entered the Muslim Quarter through an obscure opening that presented itself right as we left the kotel grounds. There’s a fork in the road there: one leads to the Jewish Quarter, and the other to the Muslim. You have a choice between two unique worlds that happen to be both close and yet, so far apart.
Our stay in the Muslim Quarter lasted about half an hour. There was only so much to see. Every store was pretty much the same. They sold funny t-shirts with inscriptions varying from “Proud to be Jewish” to “Free Palestine,” Arabian sweets, soft drinks, religious paraphernalia (mostly Jewish), etc. There were a few phone shops, as well as a lot of lingerie stands. I guessed they were marketing mostly stolen goods, although one can never know.
Our foray into “enemy territory” was uneventful for the most part. The only time I sensed trouble was coming was when a group of three young Arabs dressed in traditional Muslim clothing sped along the narrow road chanting something I couldn’t understand. I could tell they were invoking the name of Allah, but other than that it could have been anything. We met a few friendly store owners whom we took pictures with. The majority of people were very friendly and courteous. This could have been because they wanted our business or were simply afraid of us just like we were of them, but it seemed they were earnest about wanting to just live their lives, and do their business without getting into politics.
I came away from this visit with a lot of questions: how come Muslims are so different from one another? There are the more modern ones who dress like Westerners, go to parties, have Jewish friends, and so on, and there are those who live in a completely different world; a world of bias and anger. These two prototypical types of Arabs and many more different kinds of people converge in Jerusalem every day. This is our reality. This is the land I love and call “home.”

A Torah Lesson Dedicated to the Speedy Recovery of a Little Hero, Adele Chaya bat Adva

I'm Eitan, a prolific blogger with interests ranging from US pop culture and sports to Israeli politics. An engaging writer who channels his creative genius to cook up a colorful stew of some rather interesting, always-provocative posts.
View all posts by Eitan Divinsky →
« Derache’ha — Israel
Summer Months (A Poem from a Few Months Ago) »