Reprinted via The Algemeiner: Not the Typical IDF Soldier’s Mom: Muslim Arab Mother Whose Son Serves in the IDF Speaks Out

Reprinted via The Algemeiner: Not the Typical IDF Soldier’s Mom: Muslim Arab Mother Whose Son Serves in the IDF Speaks Out 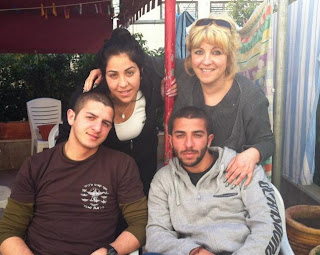 Anet Haskia is not the typical mom of a soldier serving in the Israel Defense Forces. A Muslim Arab, who grew up in a mixed Arab-Jewish city in the north, Haskia is breathing a little easier this week.
For Haskia, Israeli Prime Minister Benjamin Netanyahu’s decision not to enter the Gaza Strip last week was “brave and right.”

The mother of three children, with a 20-year-old IDF combat soldier, Haskia told Tazpit News Agency, that “many Israeli soldiers’ lives were saved thanks to that decision.”

“Going into Gaza would have yielded success for the Hamas terrorists. Israel did what it had to do for the time being to stop the rocket attacks and played it smart.”

Haskia who was born and raised in Acre (Akko), a mixed Arab-Jewish city in the Western Galilee in northern Israel, is openly vocal about her support for the Jewish state of Israel.

“I am proud to live in Israel,” she says. “I am even prouder that both my sons have served as soldiers for this country.”

“If I was living in Gaza, I would have no rights as a woman under Hamas,” explained Haskia. “And you can’t expect anything different—Hamas is a terror organization, they treat people like animals with no regard to human life. They will never hold democratic elections like they do in Israel.”

“I’m open about these truths,” adds Haskia. “The Arab MKs in the Israeli Knesset don’t represent me. The extremist left-wing in Israel also doesn’t represent me and others in my community who share my beliefs. Those corrupt politicians just contribute to hate, incitement and lies.”

“When an IDF soldier is killed in combat, not one Arab MK will stand up and offer his condolences to the bereaved family,” she exclaims. “These Arab MKs enjoy democratic rights but don’t appreciate them.”

Anet explains that her attitude towards the Jewish state as a member of the Arab minority country stems from the fact that she was raised in a home that “respected both Hebrew and Arabic-speakers.”

“When I grew up in Akko, we had good relations between Jewish and Arab families.”

“I realized early on that I wanted my children to advance in Israeli society. They studied in a private Jewish school on a kibbutz and were exposed to a different mentality. It was not an easy road, but I taught my children to always be proud of their identity and not to cry and whine like our politicians.”
During Israel’s Operation Pillar of Defense, Haskia did not just sit worrying over what may happen to her son—the proud mom did her share to help Israel as well. “Over 12 years, Hamas has been firing rockets at Israeli civilians and all you see are photos of Gaza in the media. Some of those photos are fakes,” Haskia pointed out.

“I noticed many times in Arab media that ‘Gaza’ photos of bleeding civilians were actually photos from other Arab conflicts in the Middle East— Syria and Iraq for example. They were being used to incite hatred against Israel, so I started to post these fake photos and their origins on my Facebook wall.”

Haskia has political ambitions as well. “I want to be part of Israeli politics some day and make a change by representing my people politically. There are many people who are too scared to speak up, who love Israel like I do and have done well here. They want a future where their children will not fall to hatred and incitement, but overcome that. I want to be their voice,” she concludes.

A Tribute to My Mom Who Celebrated her Hebrew Birthday Yesterday

I'm Eitan, a prolific blogger with interests ranging from US pop culture and sports to Israeli politics. An engaging writer who channels his creative genius to cook up a colorful stew of some rather interesting, always-provocative posts.
View all posts by Eitan Divinsky →
« The Miracle of Hannukah
End of Days »