Dissecting a Yahoo article on Israel

Dissecting a Yahoo article on Israel 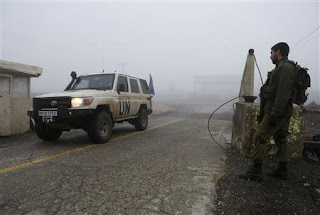 The following is a “news” piece by: Dominic Evans and Khaled Yacoub Oweis, both of whom are clearly heavily biased against Israel, and one of whom is clearly an Arab (Israeli media outlets such as the JPost employ Arab writers whereas a news source like Yahoo or the New York Times would never employ a pro-Israel journalist to cover the Middle East).

BEIRUT/AMMAN (Reuters) – Syria warned on Thursday of a possible “surprise” response to Israel‘s attack on its territory and Russia condemned the air strike as an unprovoked violation of international law.

Damascus could take “a surprise decision to respond to the aggression of the Israeli warplanes”, Syrian ambassador to Lebanon Ali Abdul-Karim Ali said a day after Israel struck against Syria.

“Syria is engaged in defending its sovereignty and its land,” Ali told a website of the Lebanese militant group Hezbollah. Syria and Israel have fought several wars and in 2007 Israeli jets bombed a suspected Syrian nuclear site, without a military response from Damascus.

Eitan says:  Please notice how there’s no mention of the almost year-long civil war in Syria and the thousands of civilian casualties murdered by the Syrian army and the rebels there. All the attention is focused squarely on Israeli “aggression.” Also, there’s no Israeli side. They’re quoting Syrian sources, Hezbollah, and the terrorist state a.k.a. “Russia.” Biased reporting? You tell me!

“Hezbollah expresses its full solidarity with Syria’s leadership, army and people,” said the group which fought an inconclusive 34-day war with Israel in 2006.

Eitan says: As much as I was against the IDF stopping short of its goals, and not going through with a full-scale attack on Hezbollah positions deep inside Lebanon like we did in ’80-’81, we definitely won the war, and every war we’ve fought with the Arabs for that matter. The IDF is far superior to any Arab army. Sorry, folks!

Russia, which has blocked Western efforts to put pressure on Syria at the United Nations, said that any Israeli air strike would amount to unacceptable military interference.

“If this information is confirmed, then we are dealing with unprovoked attacks on targets on the territory of a sovereign country, which blatantly violates the U.N. Charter and is unacceptable, no matter the motives to justify it,” the Foreign Ministry said in a statement.

Eitan says: Seriously!? I can’t believe it: a piece of actual untainted news. My, my!

“It is necessary for the sides which take tough stances on Syria to now take serious steps and decisive stances against this aggression by Tel Aviv and uphold criteria for security in the region,” Abdullahian said.

Eitan says: Same ol’, same ol’…Comments by the “Superior Leader of Iran,” yet another terrorist state represented in the article. Not democratically-elected Israeli politicians, no, nowhere to be seen.

Israeli newspapers quoted foreign media on Thursday for reports on the attack. Journalists in Israel are required to submit articles on security and military issues to the censor, which has the power to block any publication of material it deems could compromise state security.

Syrian state television said two people were killed in the raid on Jamraya, which lies in the 25-km (15-mile) strip between Damascus and the Lebanese border. It described it as a scientific research centre “aimed at raising the level of resistance and self-defense”.

Eitan says: If this isn’t Yahoo reporters feeding Americans anti-Semitic propaganda, I’m not quite sure what it is…

I just wanted to include the names of other anti-Semitic reporters here (I suspect at least one is Jewish which makes sense of course): Additional reporting by Mariam Karouny and Oliver Holmes in Beirut, Gabriela Baczynska in Moscow and Marcus George in Dubai; editing by David Stamp

A Torah Lesson Dedicated to the Speedy Recovery of a Little Hero, Adele Chaya bat Adva

I'm Eitan, a prolific blogger with interests ranging from US pop culture and sports to Israeli politics. An engaging writer who channels his creative genius to cook up a colorful stew of some rather interesting, always-provocative posts.
View all posts by Eitan Divinsky →
« A Primer of Tomorrow’s Elections in Israel
Someone Hagglin’ Hagle or it Just Him? »