Chess and Judaism (Based on the Learning at Aliyos Yerushalayim)

Chess and Judaism (Based on the Learning at Aliyos Yerushalayim) 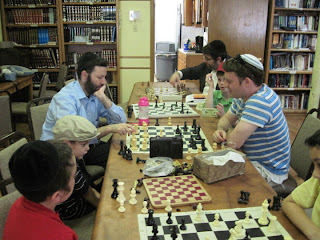 My chevruta today pointed out some interesting things from the book we were learning that got me thinking: Judaism–the practice, the laws, and the statutes that are a part of it make sense for the most part. There are some halachot (laws that make up the practice of Judaism) that are based on “sod” or the “secret” teachings that make up kabala/zochar, but it seems that a majority are derived from Gemora (oral tradition) and the Rishonim/Achronim (the greatest Rabbis from the times of the Second Temple to modern day).

I don’t know exactly how to define “Jusaism,” nor will I delve into this complex subject at the moment, but suffice it to say that the ancient way of life of the Jewish people makes sense. It’s passed the litmus test of time, paving the way for generations of Torah scholars. It’s met and exceeded expectations. Every obstacle on its path has been cleared one after the next. So Judaism is a logical practice. So’s chess, possibly the most ancient “game” known to man.

There are questions surrounding whether chess is a “game” or a “sport.” It’s very difficult “pinpointing” chess. There’s no clear definition just like there’s no clear definition to “Judaism” i.e. are the Jewish people a nation or is being “Jewish” a religion? But it follows logic. So does chess. As a matter of fact, it’s a game (let’s call it that) that connects several worlds. One needs to have mastery of several senses to be a good chess player just like being a pious Jew takes more than just outwards appearance but also an inwards sense of self and a yearning to create a more just world (tikkun olam).

Another key point worth making is that an experienced chess player learns to “see” patterns. You begin realizing that every game you play is similar in certain ways, and start being able to notice signs. The same can be said of Judaism. Halacha not only makes sense, but after a while, you become alert to “patterns” that repeat themselves. I realize this is a very general statement, but I just can’t think of examples at the moment. I’m sure my reader is wiser than me in this department and will be able to do so on his/her own…

I wouldn’t go as far as saying that chess and Judaism are the same. There are many obvious differences, but I just wanted to publish the what I was thinking as I sat there in a cozy Jerusalem synagogue where the Rabbi is a man of great spirit and integrity who continues to inspire me on a daily basis.

I’m not an easy listener by any stretch of the imagination, and I’m not easy to please, but Rabbi Yitzchok Snyder has captured my imagination with his Torah drashot (lectures). Please tune in to the Rabbi and if you live in Jerusalem, feel free to join his study group (evenings 7:45-9:30pm)

I'm Eitan, a prolific blogger with interests ranging from US pop culture and sports to Israeli politics. An engaging writer who channels his creative genius to cook up a colorful stew of some rather interesting, always-provocative posts.
View all posts by Eitan Divinsky →
« Chitown Bears On Fast Track to Superbowl?
Two-State Solution: Are You Straight Kidding Me!? »